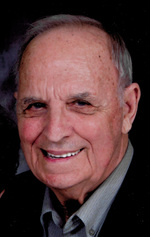 LOUIS GILLES MARIUS
It is with great sadness that the family announces the passing of Louis Gilles Marius on Saturday, October 10, 2020, at Grace Hospice at the age of 87.
He will be deeply missed by his loving wife of 67 years Raymonde, his children Louise (Al), Lorraine, Larry (Louise), Hélène (Glen) and Claire (Don), 12 grandchildren, 19 great-grandchildren, his brother Gilles (Marilyn), his sister-in-law Denise Marius, as well as numerous other family members.
Louis was pre-deceased by his father Théophile in 1974, his brother Raymond in 1975 and his mother Louise in 1993.
Louis was born in St. Boniface on April 6, 1933 to his parents Théophile and Louise Marius (nee Paul). He attended Collège de St. Boniface and graduated in 1951. After graduation, Louis entered the workforce by joining the family business known as Victor’s Wholesale. He later co-owned Victor’s with his brothers until the business was sold in 1983. In 1985, he became a partner in the St. Malo Hotel and decided to retire the following year. In retirement, Louis and Raymonde loved to spend summers at their cottage at Albert Beach, and their winters in Arizona and in later years, Penticton. They enjoyed the warm weather and friendships they made there.
Louis fell in love with hockey and started playing at a very young age. His ability and talent enabled him to suit up for teams such as the Minnedosa Jets and the St. Boniface Canadiens (a team that went to the 1953 Memorial Cup and was later inducted to the Manitoba Hockey Hall of Fame in 2009). He was proud to say that he was drafted by the Detroit Red Wings but instead chose to stay in St. Boniface and start a life with his true love Raymonde.
Louis was a devoted husband, father and “grand-père” who will be dearly missed. He was a Knights of Columbus brother and a devout Catholic. His faith was the foundation for how he lived his life. A very special thank you to Father Sam for his compassionate visits and phone calls, and for praying with Louis.
Cremation has taken place and a private funeral mass celebrating his life will occur at a later date. In lieu of flowers, if family and friends so desire, a donation may be made in Louis’ memory to CancerCare Manitoba.
The family would like to extend their sincere appreciation to the doctors, nurses and personnel at HSC CancerCare, WRHA Palliative Care, Riverview Palliative Care 3 East Wing and Grace Hospice for the wonderful care and support given to Louis.

Family invite friends to sign the online book of condolences at ejcoutu.ca