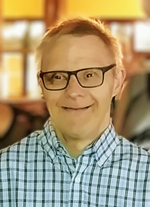 It is with great sadness the family of Lindsay Willis announces his passing on December 11, 2020 succumbing to Covid 19 at the age 63 in Winnipeg, MB.
Lindsay was predeceased by his father Raymond Willis in 1984 and his mother Anne Willis in 2000, his brother Larry Willis in 2016, brother-in-laws Jim Young in 2013 and Rainer Wagner in 2011. He will be lovingly remembered by his sisters Peggy Young of Winnipeg and Gladys Wagner of St. Albert, Alberta as well as his nieces and nephews Russell Young, Kelly (Carrie) Young, Ryan (Kathryn) Young, Chris (Lisa) Young of Winnipeg, Clayton (Heather) Wagner, Neal Wagner of Edmonton, AB, Melvin (Shaunda) Willis, Candice Willis (Chris), Bobbi Jo (Keith) Lyall, and Wendy Willis of Kamloops, BC, as well as numerous great nieces and nephews. Also left to cherish his memory are his special group home family of 40 years, Lori, Teresa and Richard.
Lindsay was a special son, brother, uncle and friend. He was a happy, gentle soul filled with love, compassion, kindness and a great sense of humour. A warm smile and a hug were in order for all he met. He was born in Winnipeg and grew up in Charleswood in his early years, where he attended school and extracurricular opportunities offered. He graduated Prince Charles School where he made many lifelong friends. In his younger years he was an active participant in Special Olympics where he specialized in weight lifting. He loved music and dance and especially Ukrainian music. He also was a member of the Seven Oaks Wellness Institute.
Lindsay was small in stature and big at heart. He loved to travel all across western Canada as well as Florida, Texas and the Dominican Republic. He enjoyed camping, swimming, fishing, wrestling, bike riding and hockey with his favourite team being the Calgary Flames, he couldn’t be persuaded to become a Winnipeg Jets fan although many people had tried. Lindsay’s most enjoyment came from spending time with his family and friends especially during Christmas and his birthday which were his two favourites!
Lindsay worked all his adult life including a variety of term jobs, and then at Grant Park Safeway’s bakery department for over 15 years. He took 3 buses one way to get to work there and transportation became quite a chore in later years. He then left Safeway and worked at Zellers on McPhillips Street until it closed, then found a job at Tim Horton’s on McPhillips Street until retiring in 2018 due to ill health. Lindsay was a hard worker, never missing an unnecessary day of work and he was very proud of the organizations he worked for. He then participated at Imaginability, health prevailing, until Covid closed it down. We were all so proud of his accomplishments throughout his life.
The family would like to thank all of the caregivers over the years at his home on Adsum Drive. Special thanks to Angela, Roy, Glen and Fortuna. Also thanks to Grace Hospital staff for their compassionate care.
In lieu of flowers, donations can be made to the Manitoba Down Syndrome Society located at 825 Sherbrook St, Winnipeg, MB R3A 1M5 or online at www.manitobadownsyndromesociety.com or a charity of one’s choice.

Lindsay took the DIS out of disabilities