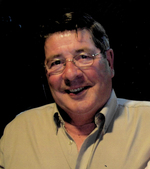 On the afternoon of December 16, 2020 Richard Berthelette left us peacefully at the age of 81 years old. He was predeceased by his siblings: Romeo, Thérèse, Adrienne, Armand, Marina, Marcellin, and Flore.

Dad was a real family man with the ability to match a child’s imagination and also the strength to be a protector for anyone dear to him. His big blue eyes would light up at the sight of his nieces, nephews, grandchildren. Passing on the lessons of hard work, standing up for yourself, or just having a good laugh. Pep was a proud supporter of our accomplishments and always provided advice for any dilemma.

Due to restrictions on public gatherings a celebration of life will follow at a later date.

Footprints
One night a man had a dream. He dreamed he was
walking along the beach with the Lord. Across the sky
flashed scenes from his life. For each scene,
he noticed two sets of footprints in the sand,
one belonged to him, and the other to the Lord.

When the last scene of his life flashed before him,
he looked back at the footprints in the sand. He noticed
that many times along the path of his life there was only
one set of footprints. He also noticed that it happened at
the very lowest and saddest times in his life.

This really bothered him and he questioned the Lord
about it. “Lord you said that once I decided to follow you
you’d walk with me all the way. But I have noticed
that during the most troublesome times in my life,
there is only one set of footprints.
I don’t understand why when I needed you the most,
You would leave me.”

The Lord replied, “My child, my precious child,
I love you and would never leave you. During your times
of trials and suffering, when you see only one set of
footprints, it was then that I carried you.”