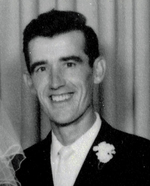 It is with heavy hearts that the family announces the passing of Bernard Polanski on Friday, March 4, 2022 at the age of 89 years at Ste. Anne Hospital.

He was predeceased by his beloved wife, Louise in 2017. He will be lovingly remembered by his son, Kelly, many extended family members and friends.

Bernard was born in Kelliher, SK on May 18, 1932. He married the love of his life, Louise Scholberg in 1963 and they moved to Lorette in the early 1970s. He very much enjoyed working at CNR and often spoke fondly of his time there.

Bernard was a supportive father, always there for Kelly and his friends whether it was taking Kelly to hockey practice or driving him to tournaments – later as the years went on they enjoyed spending time watching the sports that they loved. He had a great adoration and love for animals, working with livestock, his dear dog, Samson, looking after our last surviving horse, Golden Honey. In Bernard’s and Louise’s early years they competed and excelled in horse shows, bringing home many trophies. Bernard’s was creative, always starting little projects such as welding and woodworking around the house during his retirement years.

Cremation will take place and a funeral mass celebrating his life will be held on Friday, March 11, 2022 at 11:00 a.m. Notre-Dame-de-Lorette Parish.